To find out about any of my  books, please contact me: 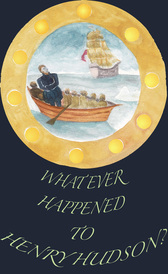 2009: Historical Fiction: History-Mystery for Teens:
Meet the famous Henry Hudson, explorer par excellence!  He didn't die an ordinary death. His men held a mutiny and he and his son, along with 6 of his loyal men, were cast out into a lifeboat, never to be seen or heard from again.
2011 was the 400th anniversary of that fateful event, so a ghost has risen up to communicate with 2 teens, to unearth the truth about what happened.  Alice and Jon are dragged into an unfathomable adventure to find out what really happened after the mutiny, as they go in search of the truth. This book celebrates both the 400th anniversary of Hudson's demise, as well as the newly opened Northwest Passage through the Arctic, (the search for which was the reason for Hudson's journey to Canada, in 1610).

2009: A short novella piece about the life and wisdom of a jellyfish.

2012, Feb: Workshop Series:  How to do it all: Family, career, creativity, household, -and still have plenty of time for your creative self.

2011: The horrors of a small street in a small neighbourhood, and the evils that lurk behind closed doors.

2010: My life exploration on the theme of energy. Things I knew as a child, and things I've learned along the way. A memoir of sorts.

A Writer At Large (incomplete)

2010: A tale of how a writer blends her real life and her fictional works, to create an alternate reality and escape the trials and tribulations of her existence.

2011: A piece of work still defining itself.

There's something about Sushi.  240 pages and counting (rewrites pending)

2010 -Personal memoirs of a single mother in the dating world.

2005 (May Nano) Wacky Comedy:  A surreptitiously evil secretary undermines the success of the company she works for.

2012, NANO: Novel about how a  teen-aged boy finds himself amidst family strife and life's struggles.

2012: The comic struggles of a young woman attempting to start her own business: Dating for the Undateable